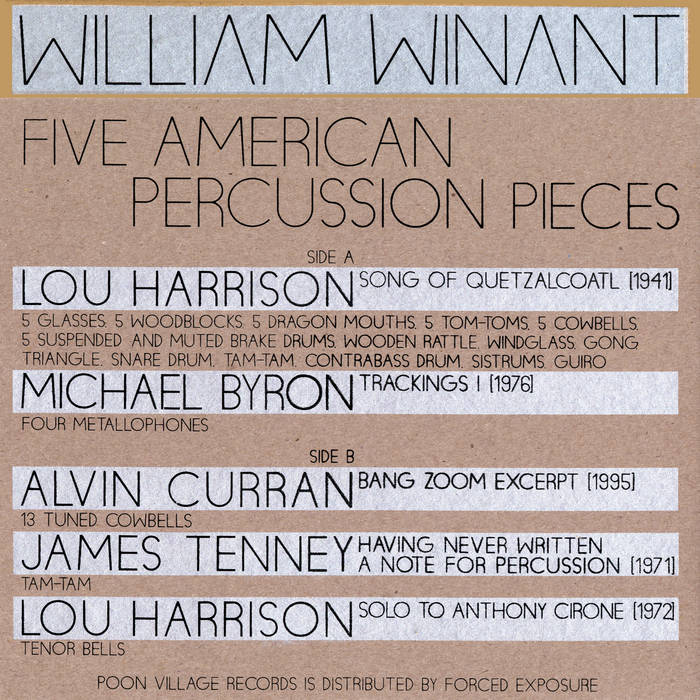 "When Mr. William Winant first came over to visit Kim Gordon and myself at her parents' house in West Los Angeles sometime in the mid-1980s, I half expected another droll, affected muso from the Oingo Boingo camp that Kim had associated with in the mid-1970s before she hightailed it to NYC with the artist Mike Kelley to not only dive into the mysterious world of post-conceptual minimalism, but to ride reckless amongst the no wave music scene of downtown Manhattan -- which is pretty much where we two met and began dating. Willie came as a surprise. He basically talked a mile a minute about anything/anyone but continually drummed his fingers on the table top, creating and exercising rhythm patterns which, to some, may have been hyper-annoying, but to me were seriously obsessed brain-to-hand compositions. I knew right away this guy was no pretendo Hollywood ring-grabber but a completely engaged lover of experimental structure and aesthetic magiks inherent in the history of percussion discussion. His history was weird, coming out of an L.A. family of television production where commercial success was how many $$ were made by dog food ads and gravitating towards the margins of creativity informed by the philosophical enlightenments of John Cage, Lou Harrison and Iannis Xenakis, all composers he had worked with. When I visited him shortly thereafter at his pad in Oakland CA, near where he taught at Mills College, he showed me scores written and inscribed to him by Xenakis! This was his world, an academic outrider zone I had mythologized as a street rat musicologist and record collector. He was very curious about who was doing what in the experimental rock 'n' roll world and I introduced him to Tom Surgal, a drummer from the Elvin Jones meets Milford Graves school of NYC free-thought drumming. We established a trio and played some amazing gigs in the early 1990s, releasing our first live document on the Victo label from Victoriaville, Canada (Piece for Jetsun Dolma, 1996). Winant's wild nature and finely-honed sense of percussive dynamism landed him neat work with John Zorn, Cecil Taylor, Anthony Braxton and the Faith No More outlier band Mr. Bungle. When we went to hear WW play with John Cage in Central Park, Willie had shaved his head into a Mohawk and wore some sick death core t-shirt. Cage must've known Willie was a man of humor, honesty and integrity -- as well as understanding the intention of the composer and delivering the goods. I always wanted him to record solo music through these years but he always would claim he wasn't ready. Is he ready now? He is seriously beyond ready and thankfully Poon Village, the only label with enough poon-power to engage this master sticksman, has come through. Big time."

Bandcamp Daily  your guide to the world of Bandcamp